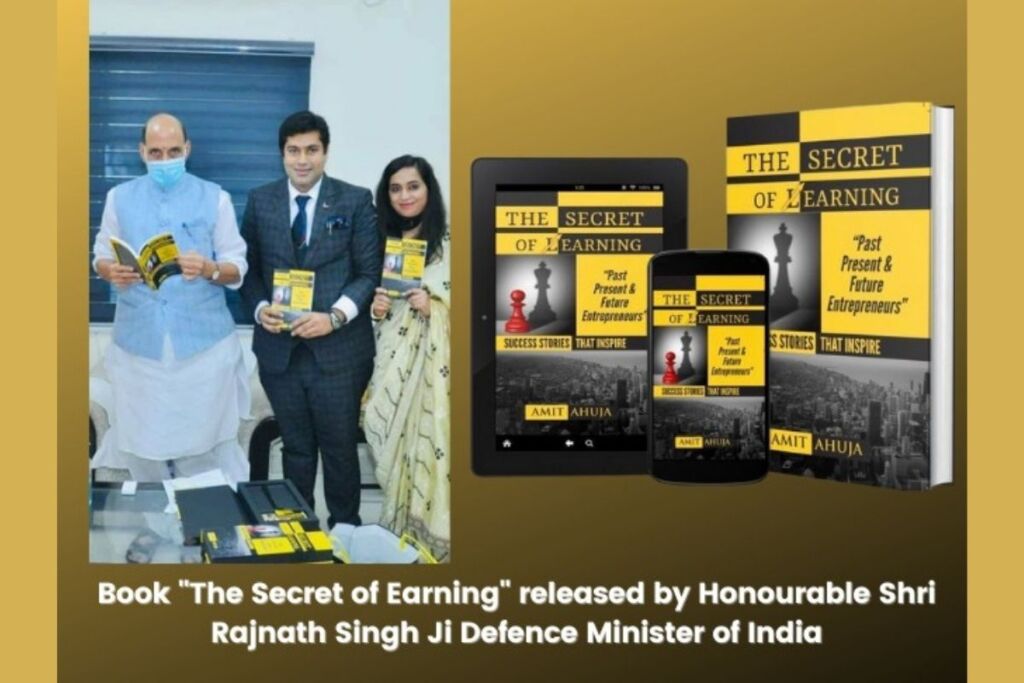 New Delhi (India), September 25: The honourable Defence Minister of India, Shri Rajnath Singh, released pioneer Indian author Amit Ahuja’s book “The Secret Of Earning” recently. The book “The Secret of Earning” shares success stories of the past, present, and future generations of entrepreneurs and secrets that would inspire someone in the field of business. The book will act as a powerful tool in attaining global entrepreneurship success despite the odds.

From entrepreneurship basics like “Who is an Entrepreneur?” to “Secrets of Retaining Success After Achieving”, all the chapters in the book aim to guide new-gen entrepreneurs towards the path of inevitable success. The book also covers entrepreneurial differences from generation to generation to develop a better and more practical understanding amongst today’s generation of entrepreneurs. Along with a long list of real-life successful businesses, entrepreneurs starting from Inventors of business in India like Dhirubhai Ambani, Jamsetji Tata, to the Exponential Entrepreneur like Gautam Adani, Radhakrishna Damani till the future Entrepreneurs like Byju Raveendran, Ramdev Baba and many more influential business tycoons.

“The Secret Of Earning” discloses trusted secrets of success that people in the business field can take inspiration from. “If these secrets are followed in the industry, success will be your destination, ” says Amit Ahuja. From secrets on how to start a business to secret habits of rich mindset people to secrets of earning, the book gives well-versed insights to their readers.

The book will be an engaging read for every entrepreneur. It will give them the needed inspiration to fuel their business ideas and futuristic ventures. The life story highlights, secrets to success, and behavioural habits of India’s biggest entrepreneurial figures like Laxmi Mittal, Azim Premji and Narayana Murthy have been covered in this book.

“I have seen people achieving success. I have seen people become successful overnight. But I have also seen people losing their way and becoming entangled in failure. This is what motivated me to write my book in the first place”, shares the rational author, Amit Ahuja. He also shares some of the Secrets of Earning which can inspire someone who has very little capital to startup anything in life. He hopes his book “The Secret Of Success” will inspire the 21st century to be entrepreneurs to believe it is possible to become successful entrepreneurship through the shared secrets to success.

Amit Ahuja is engaged in multiple avenues of business as he has learned from his father how diversified business is helpful to achieve success. He aspired to be a civil engineer from RKNEC Nagpur but was unable to complete the degree due to the early demise of his father and being overburdened with family responsibilities joined the business when he was just 17. He got married to his wife Pooja in 2009 and has two beautiful daughters, Saisha and Aarna. His extraordinary business sense with curiosity to learn has aided him in becoming the ultimate opportunist. He considers his Mother Mrs Sadhna Ahuja as the pillar of strength.

His book “The Secret Of Earning” got released recently in September. It has been published by the Adhyaan Books Publishers, New Delhi. The author has dedicated the book to his father, Late Shri Prahlad Rai Ahuja, who was a well-known businessman in Raipur himself.

Check out the book at Amazon.